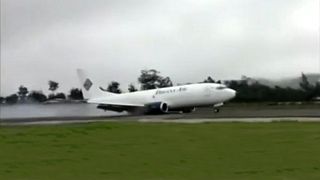 Dramatic images of a Trigana Air Boeing 737 cargo plane skidding off the runway at an airport in Wamena, Indonesia, this morning (September 13) have been released. The plane, which was carrying over 14 tonnes of fuel, departed from Sentani Airport in the country and scraped along the runway for around a kilometre upon landing. “They touched down very hard in a nose high attitude which instantly collapsed the main gear. The left gear was ripped from the airframe as it skidded along the runway,” Pilot Matt Dearden told CNN. Police reports have confirmed that there were no casualties.